Making room for the Spirit

Hear the story on this podcast episode.

As Jadon, a pastor, a Muslim man, and his Christian wife knelt and prayed on the floor of a small home in Kenya, they were struck by how God had far exceeded their expectations for the day. 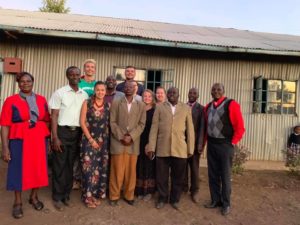 Jadon and Bailey were leading their first outreach team, and as they settled in the home of Bishop Francis at 2am, they had an idea of what the following weeks would entail.  Their goal was to connect with ministries that were intertwined with orphan work and non-profit schooling; they anticipated a youth-focused outreach trip, sharing and interacting with thousands of kids in and out of classrooms.  The Bishop’s 40 years of experience serving in Nairobi, including planting 250 churches, meant he was connected with many pastors and entities.

As Bishop Francis served the team a feast in the early hours of the day, he broke the news to them:

“I am sorry to share that the teachers are currently on strike, and we will not be able to serve at the schools as we had planned.  However, I would suggest that we visit our sister churches, and you can share a message.”

While Jadon had expectations for the trip, his main expectation was that they were there to serve and share about God, even if it looked entirely different than their plans.

“Could we have maybe one day of street evangelism before we go and do that?”

The pastor allowed it.  He gathered a few fellow pastors to translate from Swahili, and they set out into the streets of Nakuru, an adjacent city, ready to share.  Bishop Francis was happy to give the group space to talk with people, but was expecting a timid, lackadaisical approach from this group of young Americans.

“He didn’t understand that we are YWAMers,” Jadon reflected.  “We are serious about sharing Jesus.”

By the end of the day, Bishop Francis’ expectations of this group — as well as God’s desire for his city — were shattered.  He watched as his neighbors were being saved and healed.

For Jadon and Bailey, it did not take long to see that God’s expectations for the trip were far greater than theirs.  They found themselves letting God lead their steps and interactions. “The lack of people speaking english helped,” Bailey remembers.  “For 20 minutes the neighbors and pastors would speak in Swahili, and we’d have no clue what was going on. We had to rely on voice of Lord for how to respond.”

At one point, a man walked right up to Jadon and started speaking; his translator, Pastor Ben, turned to Jadon and said, “This man is Muslim, and does not speak english, but his wife is Christian, and does.  He wants us to come to his house.” Sensing God was at work, Jadon followed the man into his home, where his wife helped him translate to her husband. Jadon felt led to share a message of how Jesus is the son of God, and not simply a moral prophet; he is that man’s savior.

The Muslim man found his expectations of the day transformed as he knelt on the floor by his wife and these two strangers, and gave his life to Christ.  His wife — who had not known what God intended to do for her spouse that day — embraced him joyfully.

As dusk cooled the heat of the day, Bishop Francis and his fellow pastors sat in awe of the transformations and miracles they had witnessed.  He and other pastors did not use this door-to-door approach to telling the good news; now, they did not want to stop.

“Can we do this everywhere?!”

“Let’s talk to everyone all the time!”

“Come to my village!” 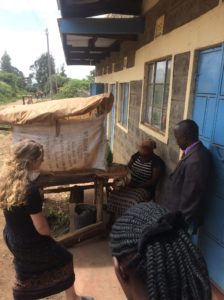 For 8 days, the blazing sun could not stop them from serving through 10 churches and their communities.  The team made Jesus famous in towns throughout Kenya and Tanzania, sometimes spending the whole day praying with people. People were saved, healed, and transformed.

On one occasion, a man who was intoxicated found himself drawn to the group, and as he listened, he grew progressively sober, until he was no longer drunk.  He felt like a new man, and began following the group, telling everyone who would listen, “Jesus has changed my life!” Many of them knew the man as a “drunk”, and his transformation spoke louder than words, “Jesus works, and here is the example!”

But Jadon and Bailey knew this was about more than individual transformation; God was about to transform entire communities.

From the moment after that first evangelism event, the pastors began shifting their long-term approach. “We’ve never gone door to door”, shared a prominent female pastor, “After these Americans leave, for the next week I’m going to take every single congregant that’s willing to come, every morning, and we’re going to go door to door and evangelize.” 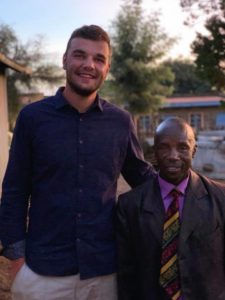 Pastor Ben, initially a mild mannered pastor, went from simple sermons to “honor the American team”, to preaching boldly about the fire of God and the power of the Holy Spirit, particularly through Leviticus 6:13, calling the congregations to a new level.

Ministry switched from reading the bible to doing the bible.  They stepped into each day in the spirit of 1 Corinthians 4:20: “For the kingdom of God is not a matter of talk but of power.”  The pastors became furious for the work of the Holy Spirit and watched as God revived their churches and neighborhoods.

“It wasn’t us doing something.”  Jadon knew this was bigger than him, his Bible knowledge, his strategies, or his plans.  “When we would share, there were signs of power that accompanied it, and it was like, ‘okay, that’s never happened before when I’ve shared my opinion with anybody else, so clearly I have no capacity to save someone or heal someone.’  I don’t authorize your healing; someone else has to, someone who has more jurisdiction over your body than I do.”

What Jadon and Bailey learned during that outreach in Kenya is true for us as well:

We simply need to be ready and willing to let the Spirit work.

Hear the story on this podcast episode.

This site uses Akismet to reduce spam. Learn how your comment data is processed.