Though it linger, wait for it

For the revelation awaits an appointed time;

it speaks of the end

and will not prove false.

Though it linger, wait for it;

it will certainly come

and will not delay.

Rebecca arrived at the YWAM Paisley Scotland campus ready to experience God.  It was 2012, and she was young, single, and unaware of what her life would look like; she also knew she was going to hear from a God who loves and knows her.

Those months were transformational, but in a sweet, continuous way; “God touched my heart; it was like when you slowly touch calm water and there is a rippling effect. His one simple touch, affected me in so many areas at once! I wanted to go deeper with Him.”

Several things became clear for her: she knew God wanted her to have confidence to use her voice, to push in to worship, and to one day return to Scotland.  As much as she wanted those things to happen immediately, she had a sense that God wanted her to learn some things first. 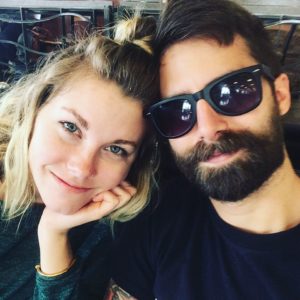 Time passed.  She met her husband, Mason, and they found they had a shared calling for worship.  In 2017 they went to YWAM Lakeside in 2017 to go through the School of Worship. Here, they learned the biblical basis and history of worship, honed their calling as worshipers, and explored the role of worship in missions.

What had been awakened in them years before now began to move them.  They knew God was calling them, as a couple, to engage worship through leading and equipping.

Rebecca had never forgotten that God was calling her to pursue worship and return to Scotland.  As year after year passed, she held to the confidence that God knew what was best, and He knew the right timing.

Seven years after the initial call, Rebecca and Mason landed in Scotland to help pioneer a new School of Worship, at the very base where it all started for Rebecca!

“Sometimes it’s hard to wait on the Lord. We don’t like to wait. But God has things He wants us to walk through before giving us more authority or another part of the puzzle.”  Rebecca knows that God had a plan for the seven years between receiving the call and pioneering a School of Worship themselves. He wanted to mold her, teach her, and equip her; He also wanted her to not do it alone, but in unity with her husband, a stranger at the time of the initial call.

Mason knows the call doesn’t end in Scotland.  “My wife and I have been inspired to pioneer more schools ourselves, in Richmond and potentially Virginia Beach, because of the fruit we have seen come from these programs. The healing, transforming work that God can accomplish through engaging in worship has repeatedly shown to be powerful and encouraging for those that seek Him.”

In 2012, Rebecca and Mason did not know what their lives would look like, and did not even know each other; meanwhile, God was laying out a beautiful plan that would become abundantly more than they could ask or think.

“It is so fun to watch as God unravels the plans for your life, to further His Kingdom; you simply have to let Him use you, step in obedience, and wait on His timing.”

proclaim his salvation day after day.

24 Declare his glory among the nations,

his marvelous deeds among all peoples.

25 For great is the Lord and most worthy of praise;

he is to be feared above all gods.

26 For all the gods of the nations are idols,

but the Lord made the heavens.

27 Splendor and majesty are before him;

strength and joy are in his dwelling place.

28 Ascribe to the Lord, all you families of nations,

ascribe to the Lord glory and strength.

29 Ascribe to the Lord the glory due his name;

bring an offering and come before him.

Worship the Lord in the splendor of his[a] holiness.

The world is firmly established; it cannot be moved.

31 Let the heavens rejoice, let the earth be glad;

let them say among the nations, “The Lord reigns!”

This site uses Akismet to reduce spam. Learn how your comment data is processed.